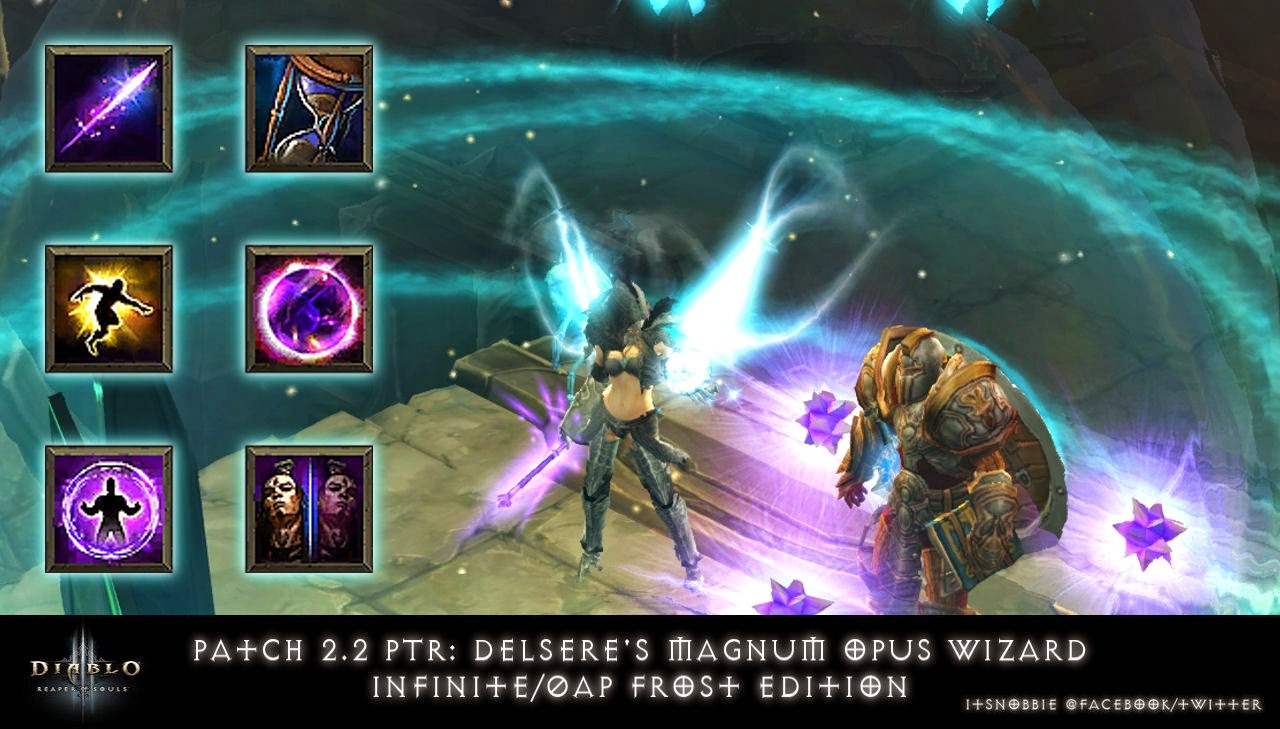 The following guide and video have been created on March 9, 2015 on the Diablo 3 Patch 2.2 PTR, build 30215. Note that anything shown here may be subject to change until the final release candidate build goes live.

Delsere's Magnum Opus is the name of a wizard set that will be introduced with the Diablo 3 patch 2.2. Its bonuses support the Slow Time spell and various attacks which will be amplified through the use of 'Slow Time', for example Magic Missile. 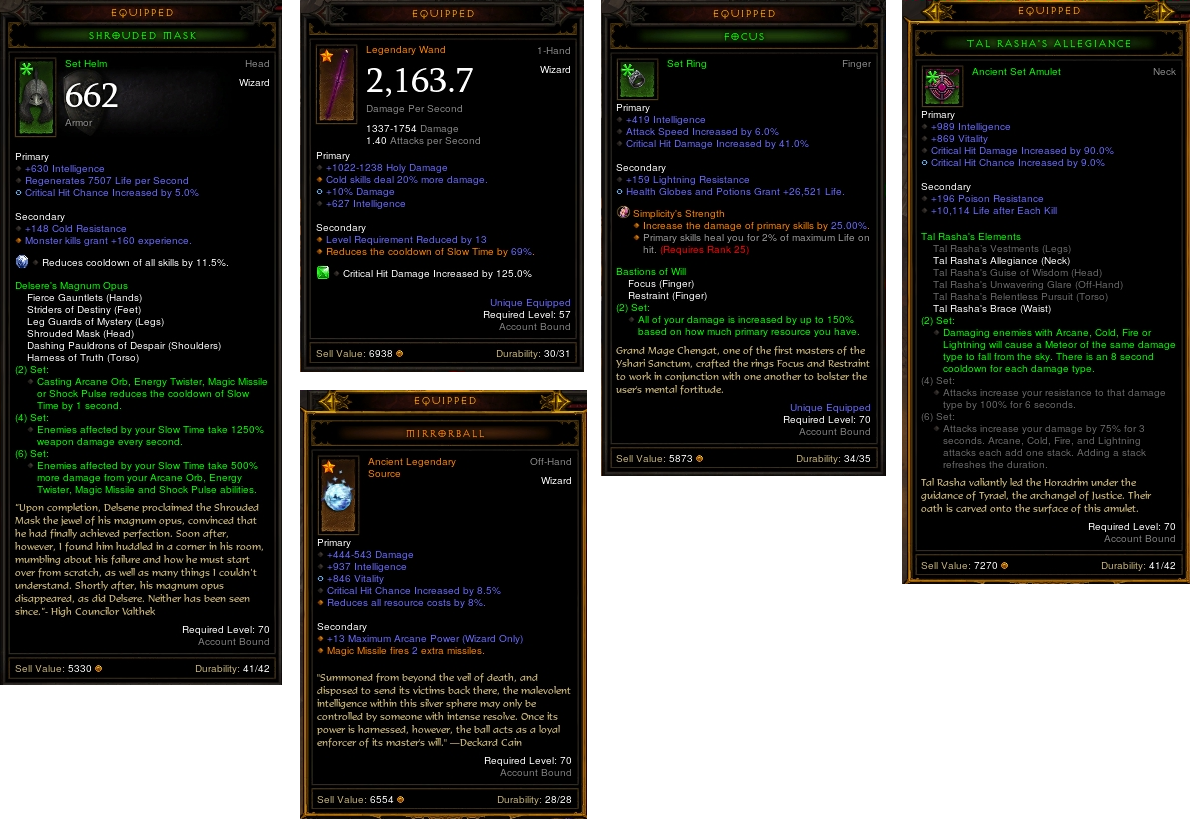 The following test build uses a tri-missile Glacial Spike (runed 'Magic Missile') as main attack, made possible through the use of a Mirrorball source. 'Glacial Spike' is a cost-free "Zero Arcane Power" (0AP) signature spell, which means that it always gets 100% benefit from the damage bonus provided by Bastion of Will, a ring set that will be updated for patch 2.2. In addition to that, we'll use items of the revised Tal Rasha's Elements whose auto-cast Meteor bonus (Frost in this case) is now available for just two equipped set pieces. See the above picture for all item stats and bonuses. The result is a very tanky build that can dish out great damage. Its crowd control ability is superb, which will make this wizard also a welcome party member.

Of special note with respect to the 'Delsere's Magnum Opus' set is the Gesture of Orpheus wand that reduces the cooldown of 'Slow Time' by up to 70%. In combination with Cooldown Reduction (CDR) through equipment (35% on this test wizard), we're able to almost chain-cast 'Slow Time' whenever and whereever we want. 'Slow Time' therefore deserves a place next to 'Glacial Spike' on the right mouse button. Note that the damage bonuses provided by 'Delsere's Magnum Opus' do not stack if you cast multiple 'Slow Time' "bubbles" on top of each other.

Two legendary gems (out of three max.) are recommended for this heavy crowd control focused build: Bane of the Trapped (obviously) and Simplicity's Strength which increases the damage of our tri-missile 'Glacial Spike' even more. As third gem you may want to pick a defensive one like Esoteric Alteration from Season 2.

As mentioned above, a tri-missile Glacial Spike (runed 'Magic Missile') is our main, cost-free main attack. The next important offensive spell is Duplicates (runed 'Mirror Image') which summons 4 illusionary duplicates of ourself that taunt nearby enemies, and cast several spells we have on our action bar. Spells cast by our 'Mirror Images' will deal just 10% of the damage of our own spells, however, because Exhaustion (runed 'Slow Time') and Absolute Zero (runed 'Black Hole') are among them, we get a huge defensive/crowd control bonus and damage amplification. 'Exhaustion' is a new rune in patch 2.2 which replaces 'Time and Space': Enemies caught inside 'Slow Time' now deal 25% less damage.

Prismatic Armor (runed 'Energy Armor') and Wormhole (runed 'Teleport') round off our build on the defensive and mobile side. 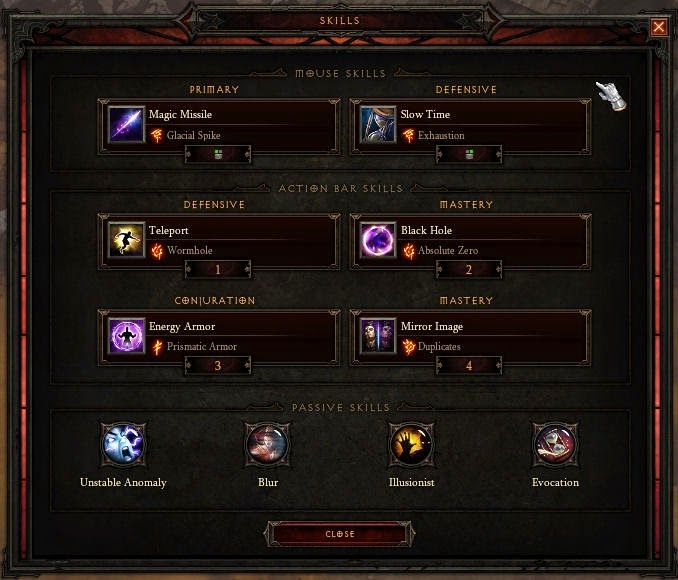 Of the passive skills we pick some that support our tanky Frost build: Unstable Anomaly (one "free Death"), Blur (reduces Damage Taken), Illusionist (Defensive Cooldowns reset), and Evocation (Cooldown reduction). Of special note with respect to our wizard is 'Illusionist' which resets the cooldowns on 'Mirror Image', 'Slow Time' and 'Teleport' when we take more than 15% of our maximum Life in damage within 1 second, which happens quite often.

The following test run has been recorded on the patch 2.2 PTR (without the legendary drop rate buff) in a standard Rift with the max. difficulty of Torment 6.

Note how the wizard can safely pave her way through the monster packs with very little effort. The visuals of the new set totally live up to the name "Magnus Opus" because she - and her Mirror Images - can basically chain-cast the 'Slow Time' spell with its half-transparent, glowing bubbles!

Build 30252 on the Patch 2.2 PTR brought updates to the bonuses of the Delsere's Magnum Opus wizard set as well as the Bastion of Will ring set (Focus & Restraint) which you can see in the following picture: 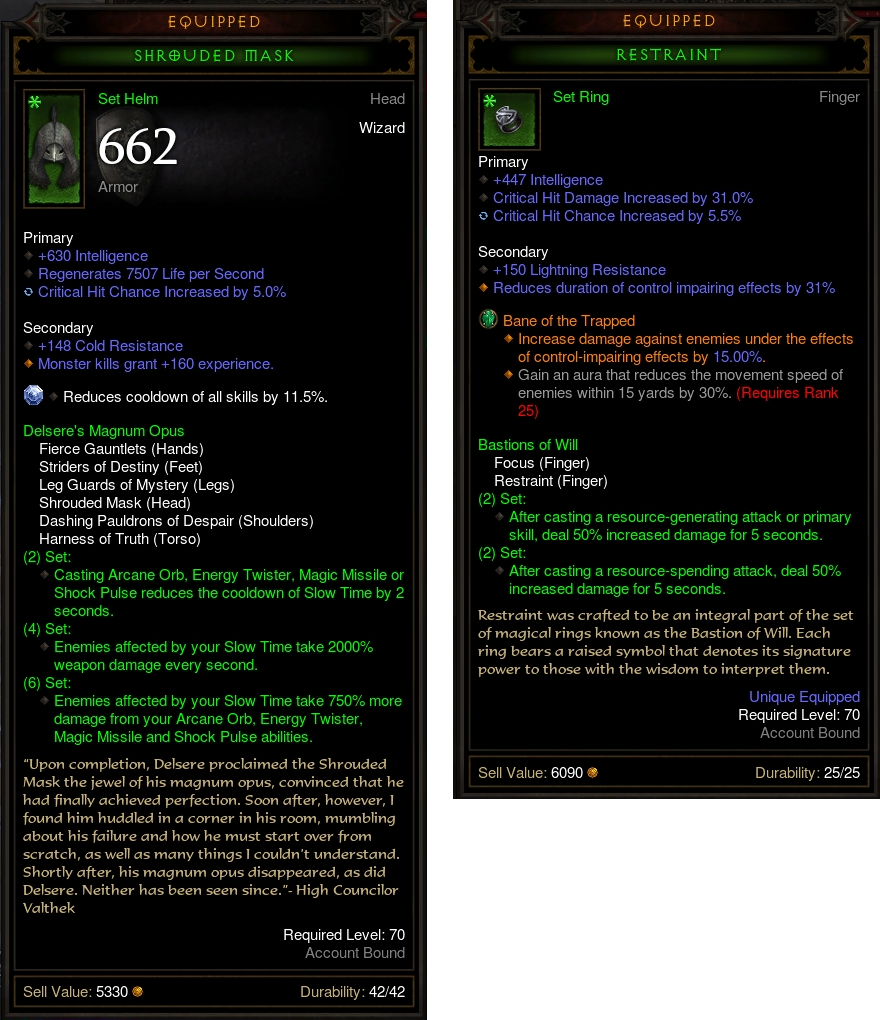 Although the mechanics of 'Bastion of Will' changed - you now have to use primary skills/resource generators & resource spenders to get the full damage bonus (which has also been nerfed) - the damage bonuses of 'Delsere's Magnum Opus' have been increased so significantly that the here described build actually got buffed overall. Just make sure that you keep 'Black Hole' on cooldown while you're firing your 'Glacial Spikes'.
Eingestellt von Unknown um 11:29