The Diablo 3 Content Patch 2.2 goes live on Tuesday, April 7, 2015 (April 8 in Europe), and Season 3 will be starting worldwide shortly after on Friday, April 10. The first thing to be noticed here is the very short duration of Season 2 which began on February 13 this year and ends after just 7 weeks next Sunday, April 5. As a comparison: Season 1 launched on August 29, 2014 and ended on February 3, 2015, which is almost a half year.
The long duration of Season 1 can be explained by the simple fact that it was a "test" to see how things develop, but what about Season 2? Was the "Sever" exploit and therefore the false Leaderboards results the cause? Hardly, because in this case Blizzard would simply fix the bug and reset the Leaderboards. The true reason was very likely the product schedule which dictates at which time which patch and Season has to go live, and the product in question is the second Diablo 3 expansion.
BlizzCon 2015 is returning to the Anaheim Convention Center on November 6 and 7, 2015, and I'd be very surprised if Blizzard isn't going to announce the 6th World of WarCraft expansion here (the 5th expansion "Warlords of Draenor" launched on November 13, 2014). This leaves the world's largest computer games fair gamescom for the revelation of the second Diablo 3 expansion, which will be open from August 5 to 9, 2015 in Cologne, Germany. To cut a long story short, patch 2.2, Season 3, and the following Ruins of Sescheron content patch (and maybe Season 4, too) should all go live before gamescom because - and that's the crux of the matter - the ruins and associated quests and/or lore are likely a prelude to the story in expansion 2. So, what can we expect in the future? Read on if you're interested in some tangible speculation!

The Reaper of Souls (RoS or D3X1 for short) expansion ends with a pretty solid hint at the possible fate of the nephalem (you, the player) in the not-so-far future. The following video is a complete recap of the Angel of Death quest including the final ingame cinematic, which can not only be looked at as ending of RoS but also as teaser and prologue of the second expansion a.k.a. D3X2.


This are Tyrael's famous last words: "...but within him [the nephalem] beats a mortal heart, that will one day be tempted to corruption. On that day, will he have the strength to resist, or will he be our doom?"
On his quest to defeat the former Archangel and now Aspect of Death Malthael, the nephalem is going to enter the "shadow world" after destroying the Soul Prison chain because only in that state he'll be able to attack and end the Reaper. He is successful but it begs the question if the exposure to the realm of shadows made the hero much more sensitive for corruption. Are the nephalem's glowing eyes we're seeing in the final ingame cinematic a sign of the growing hate and hunger for more power, which will eventually lead to him/her joining the "dark side"? This would mean that - after the events of Diablo I - we would change roles once again in D3X2, i.e. the nephalem becomes a "dark wanderer", and we - the adventurers - have to prevent him/her from joining Evil (hint: If you're not familiar with the Diablo lore, IGN posted a nice 5-minute video recap here on YouTube).

Before I continue, I'll make a very quick TLDR summary of some major events in the Diablo universe so that you can follow my speculations. If you want to know more about the here mentioned characters, locations, artefacts etc, just follow the Diablo Wiki links provided in the text.

In the beginning, Anu was the ultimate good, and Tathamet was the ultimate evil in the form of a seven-headed dragon. They warred against each other in an unending battle for ages uncounted. Neither could gain the upper hand and finally, they delivered their final blows resulting in a clash of light and darkness that gave birth to the universe itself, killing them both. Anu's legacy were The Eye of Anu, later known as the Worldstone, and the Crystal Arch, around which the High Heavens took shape and from which the angels came into existence. The archangels, like Auriel, Imperius or Tyrael, are living embodiments of the virtues of Anu.
From Tathamet's putrid flesh arose the realms of the Burning Hells, and the race of demons. Additionally, his seven heads spawned the Great Evils, namely Baal, Diablo and Mephisto (the three Prime Evils), and Andariel, Azmodan, Belial and Duriel (the four Lesser Evils).
Again uncounted ages later, Tathamet, in some sense, returned to the face of creation because Diablo, the Lord of Terror, was able to combine the essences of the other six Evils through the Black Soulstone into his own "body", becoming a singular Prime Evil. While he was defeated by the nephalem (in Diablo 3), his spirit returned to the Black Soulstone, and through the destruction of the stone at the hands of Malthael during the final encounter in RoS (see the "Angel of Death" video above), he was released into creation once more.

So, this is where we stand right now: Diablo is free again, and the Black Soulstone, which "forged" his last incarnation as "Singular Prime Evil", is destroyed. The nephalem (you, the player) has overcome Evil in numerous forms, you are more powerful than ever, and Diablo has to find other means to subdue you.

Mephisto, the Lord of Hatred

It remains to be seen how the Diablo team develops the lore further in D3X2. Is the "Singular Prime Evil" Diablo able to maintain his form now that the Black Soulstone, an artefact of incredible power, is destroyed? Is the stone destroyed at all, or have its shards landed somewhere on Sanctuary, just like the shards of Tyrael's sword did in Diablo 3? Is the third Diablo possibly decomposed again into the Great and Lesser Evils?
I personally would love to see my favorite "baddies" back in action, namely Mephisto and Baal, because it would be incredibly boring if we were now left with just one "Uber Diablo" that chases us for the rest of our days. The chances that the first option becomes reality are actually pretty good, and I'll tell you why. 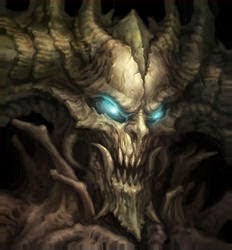 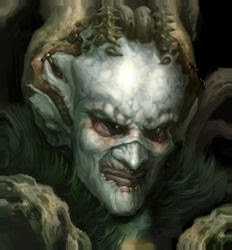 Mephisto, the Lord of Hatred and formerly imprisoned in the Temple City of Travincal in Kurast, is the number one address when it comes to corruption. It was him who corrupted the High Council of Zakarum, and eventually sent Archbishop Lazarus to reawaken his brother Diablo, which set all things in motion. Both a portrait of Baal and Mephisto can already be found in the RoS game files, although none of them made an appearance yet except in the journals. Additionally, a BlizzCon 2011 Scavenger Hunt contained a Diablo 3 jungle artwork (see the left picture below), and Blizzard concept artist Peter Lee posted a Kurast image (right picture), which may hint to Kurast as one region in D3X2.

If I were Diablo now, I'd send Mephisto to corrupt the nephalem and convince him to join the dark side. Kurast would be an exciting and iconic location for this, too.

Baal, the Lord of Destruction

If you say Sescheron, you must also say Baal, Lord of Destruction. Sescheron was besieged by the Prime Evil Baal and his Army of Destruction during their assault on Mount Arreat. Now, Sescheron lies empty, and monsters have come up from the forests and down from the mountains to infest its ruins. The following video shows a snippet from the Diablo 2: Lord of Destruction intro cinematic with said siege, and a slideshow preview of the upcoming Ruins of Sescheron, which will be available in the Adventure Mode of Diablo 3 in Act 3 near the Arreat Crater.

Do the Ruins of Sescheron point to Baal as one of the D3X2 antagonists?

Are the ruins a prelude to D3X2, just like the Timeless Isle was to WoW: Warlords of Draenor? I'd say "Yes" because the timing is perfect. What is Baal up to? I don't know but he may be the link to the next Diablo 3 class.

When their homeland was shattered by Baal and his Army of Destruction and the Worldstone destroyed, many Barbarians lost faith. They became aimless, haunted by their past, traveling from place to place without honor or direction. But not all Barbarians have given up their vigil. Some still honor the harsh snows of Arreat's summit and prowl the outskirts of its crater. Even though Azmodan could eventually be defeated, the weakened region and social chaos would be an easy target for a reinvigorated Baal and his demons. Such a scenario would be a great opportunity to have the Barbarians call upon the help of their cousins, the Druids of Scosglen, a hybrid shapeshifter class that in my opinion is sorely needed in Diablo 3. 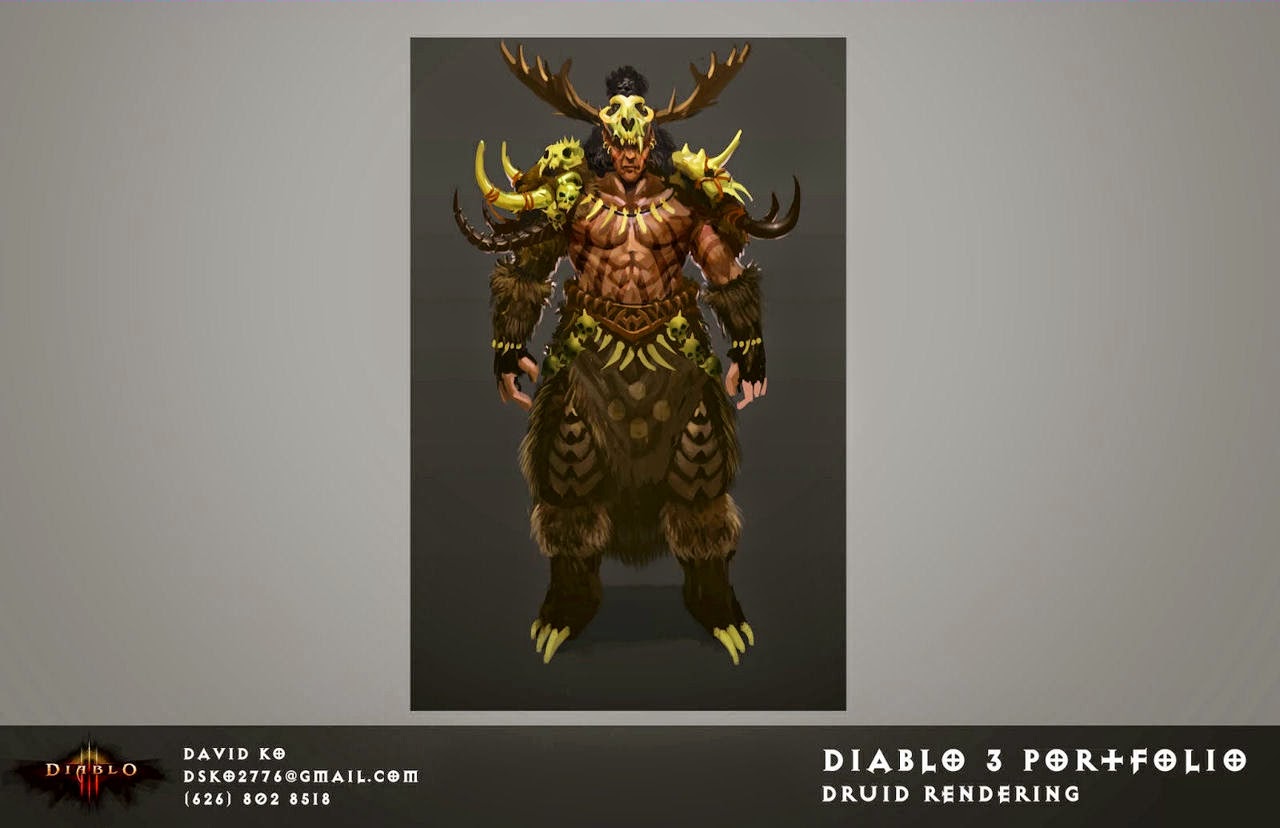 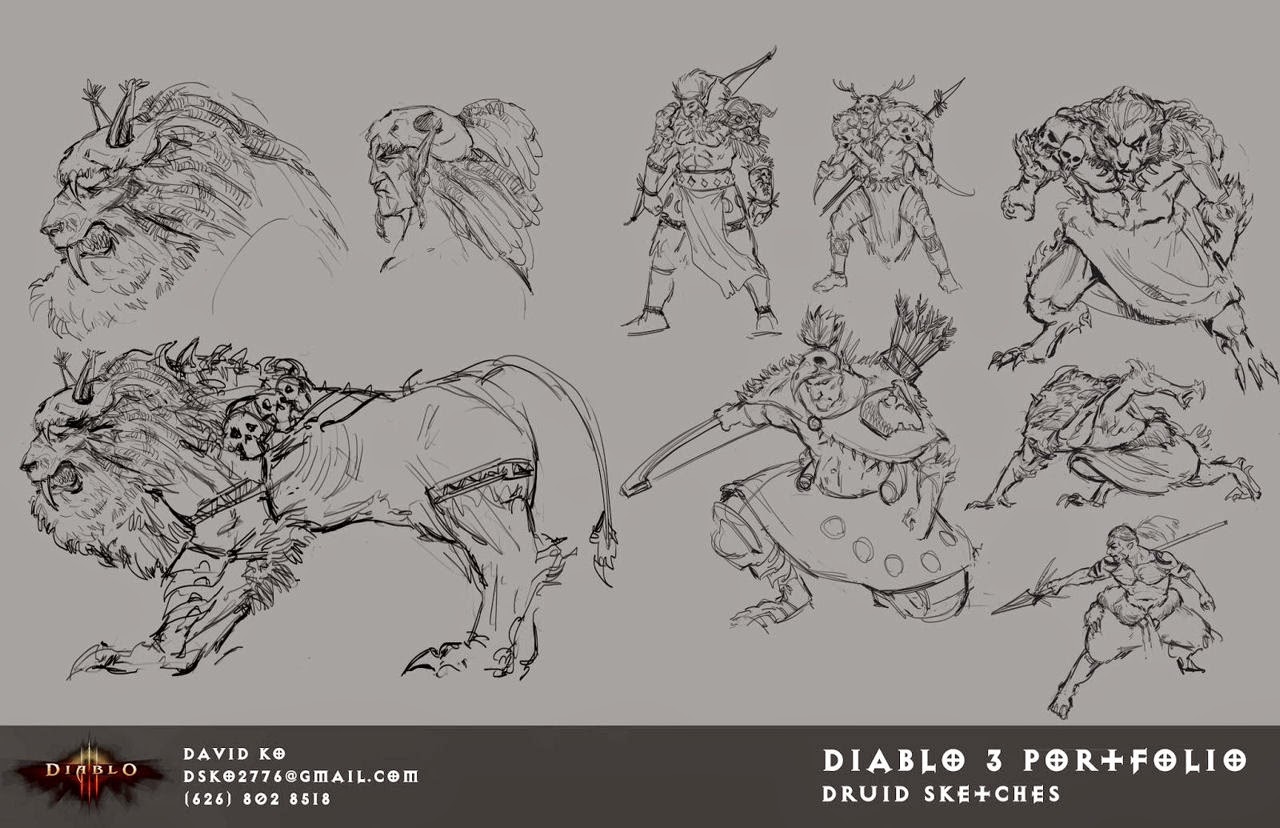 The Druids entered Scosglen at around the same time Bul-Kathos, the Immortal King, united the Barbarian tribes of the Northern Steppes. Vasily, a brother of Bul-Kathos, gathered together a small group consisting of the tribes' greatest warrior-poets and shamans and retreated into the forests surrounding the area known as Scosglen. There he and his people created the first of the Druid Colleges, forging a new way of life for themselves (source). More about the Druids and their role as a playable class in "Lord of Destruction" can be found here.

Now, you may think that two Diablo 3 Druid artworks are a bit thin to speculate upon, but there's more. The following image is from the slideshow that the Diablo team presented during BlizzCon 2014, when the Ruins of Sescheron were introduced as future RoS content. It shows one concept for the "Rat King", the boss of the ruins. 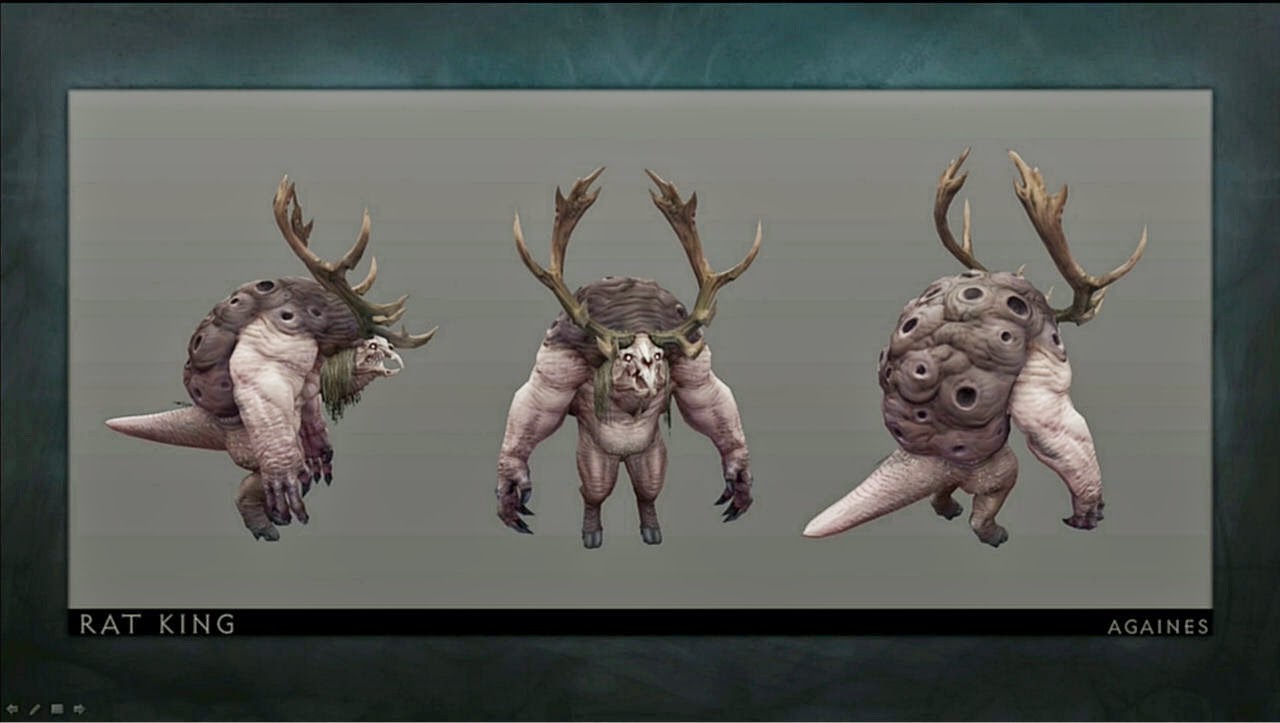 Is there some Moonkin DNA in this Rat King concept?

It might be a red herring, but I bet it was either a Freudian slip or a teaser. What we are looking at here seems to be some misshapen Druid, and because that would have given away too much in advance (Sescheron goes live before D3X2), they finally ditched it and made another Rat King model.

Last, but not least, I want to share an interesting restriction when you create your hero in Diablo 3. Before RoS came out, I could create a female witch doctor named "Adria" (after the infamous witch). She is still alive and kicking as you can see on the following left image, and I haven't been forced to rename her (yet). After RoS came out, it was not possible anymore to create a hero named "Adria", so there's obviously a database with "forbidden" names active now. 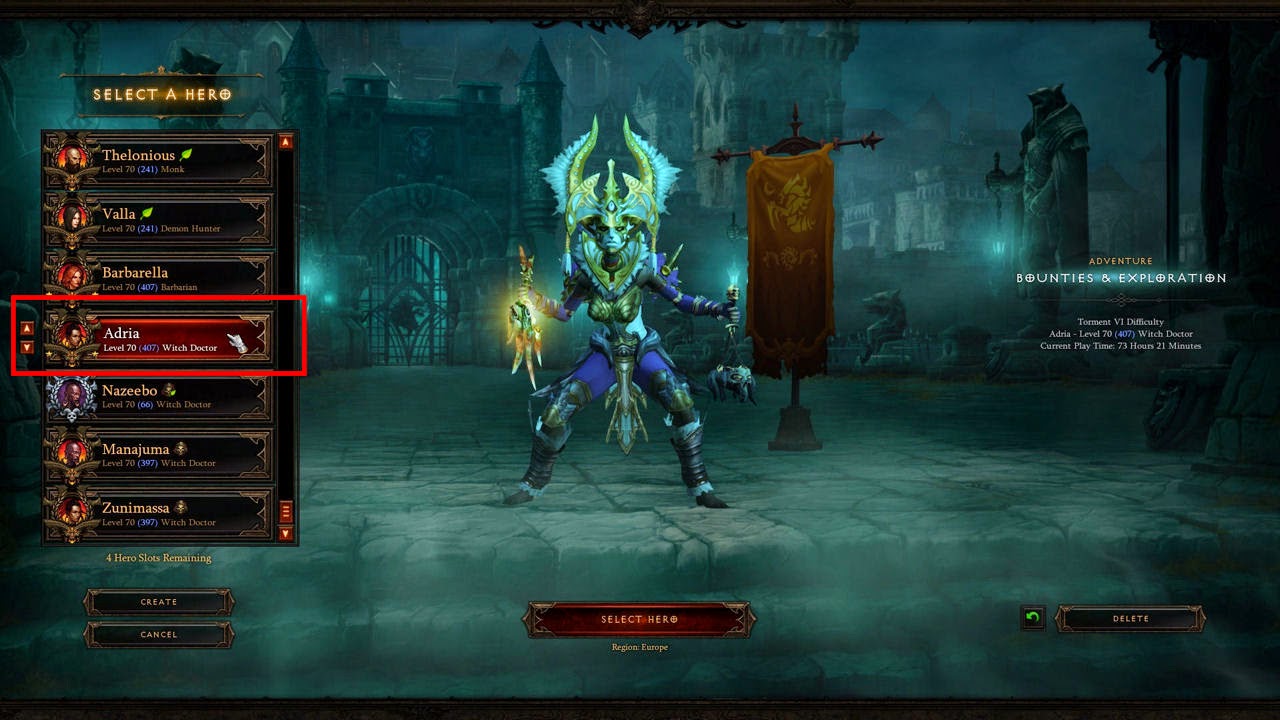 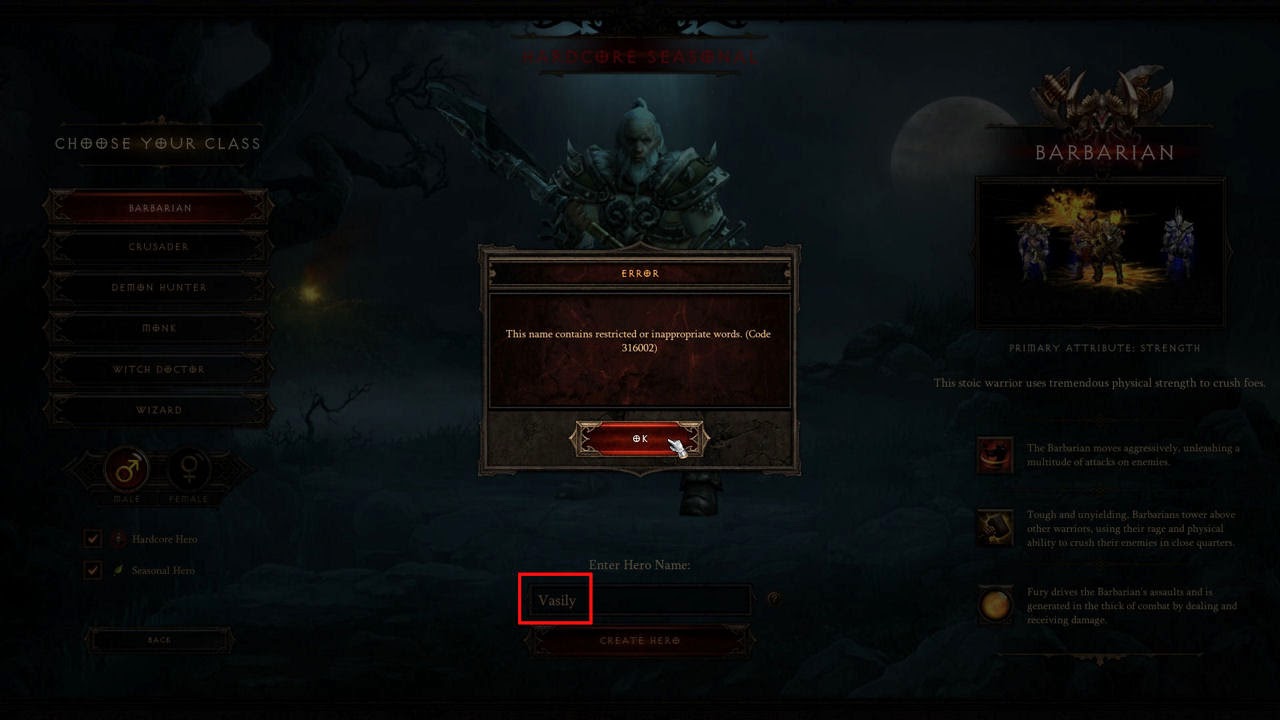 The names "Adria" and "Vasily" are not allowed for player characters

Yesterday, I did the test and tried to create a new character named "Vasily", who is the aforementioned leader of the Druids in Diablo. I'm sure you've already guessed what happened (see the right picture).

That's it so far with my speculations about the possible contents of the next Diablo 3 expansion. Whether or not all, or at least some of it is confirmed should be known soon. If nothing is confirmed, then you should have read some entertaining fan fiction that makes the wait for D3X2 a little shorter. ^^